If there’s one thing you must know about me in relation to travelling, it is that I travel for the food. I also go for photography jaunts and sight-seeing, yes, and I like learning about the history of the places I go to, but I travel primarily for the good food. The different food, not just ones I can cook myself. The local food, the ones that the locals love to go to, and not just the ones that get featured in expensive magazines.

That’s what attracted me to the Davao Food Appreciation Tour, actually. I was going to get inside information from Davaeños! If you want to know where are the best places to eat in Davao, then read on. END_OF_DOCUMENT_TOKEN_TO_BE_REPLACED

Crème Brûlée Macchiato is a warm mix of creme brulee flavored syrup, steamed milk, and Starbucks® espresso. It is then topped with foam and lined with roast dark caramel.

END_OF_DOCUMENT_TOKEN_TO_BE_REPLACED

“I don’t drink coffee, I take tea, my dear,” says the Englishman in New York. Although I’m no Englishman—or Englishwoman, for that matter—I also do prefer tea over coffee. So when I sensed the blogosphere being a-twitter about this little tea house in Greenhills, I immediately went, “Where is this is Serenitea and why haven’t I been there?!”

Serenitea, as it turns out, a teeny tiny hole in the wall along J. Abad-Santos street in Greenhills. END_OF_DOCUMENT_TOKEN_TO_BE_REPLACED

Last night was Ria‘s last night here in Manila before going back to Davao, so Mica, Cai and I went to have dinner with her in Teriyaki Boy Greenhills.

When I got there, the girls were already having gyoza and asupara bacon for appetizers. We all wanted to order the whole menu, so it took a while for us to order.

END_OF_DOCUMENT_TOKEN_TO_BE_REPLACED

I’m not a fan of having oranges in my meat. Desserts, maybe, but not my meat. Come to think of it, I’m not exactly a fan of orange altogether. Nope, not even orange juice.

So you can imagine my reluctance last night when I realized that the event I was going to—the event I already RSVP’d “yes” to—was an ORANGE event. Meh. But I went anyway. After all, I don’t exactly hate oranges, and, let’s face it: I LOVE FOOD.

So off to Chowking Rizal Drive, I went. END_OF_DOCUMENT_TOKEN_TO_BE_REPLACED

But only when December arrives.

This year, though, it’s a little bit different.

Tonight, we’ll be having our monthly family project, Dine&Jam. We don’t usually do Dine&Jam near Christmas because everybody’s already occupied with…well…Christmas, but this year we’re holding it today. Tonight. In a few hours, actually. And since today is oh, so close to December, we decided to make an exception to our  Christmas Starts Only in December rule. This year, we’re decorating on November 29th. Seriously, this goes against tradition!

This afternoon, while my brother went straight to the kitchen to cook for the evening, I went to prepare the decors. We got boughs of holly (fa la la la la, la la la la), wreaths, candles, old Christmas photos, and, of course, my mother’s collection of nativity scenes. (More about that in a later blog post.) Since almost half of our Christmas decors date back to my childhood years, I can’t help remembering past Christmases with family and friends whenever we start decorating. I get that warm, fuzzy feeling, y’know, and if this day were a movie, this is the part where “Have Yourself A Merry Little Christmas” would play in the background.

One of the problems in Christmas decorating is this: enjoying it so much that we forget to eat. Haha! Okay, so we already had lunch, but by the time I realized that I hadn’t had a glass of water in a while, my stomach was already rumbling. But between Christmas decorating and preparation for Dine&Jam, it was a bit hard to move around to make something to eat, and the only thing filling and easy to get within my line of sight was bread. And a couple of tubs of Century Bangus Fillet. Sweet!

Whoever invented the easy open can is a genius. Oh, and of course, thanks to Century for putting the easy open tab on their Bangus Fillet. Good thing, too, because the table was too crowded to set up for merienda. We only opened one tub, and it was just right for all of us. Maybe we’ll open the other tubs for our midnight snack.

Tonight’s going to be a busy, busy night. Fun, yes, but very busy. But I think I’m pumped up with that Christmas-y feeling! And I’m pretty sure that the spicy, spicy, spicy Spanish-style bangus fillet kind of helped, too. 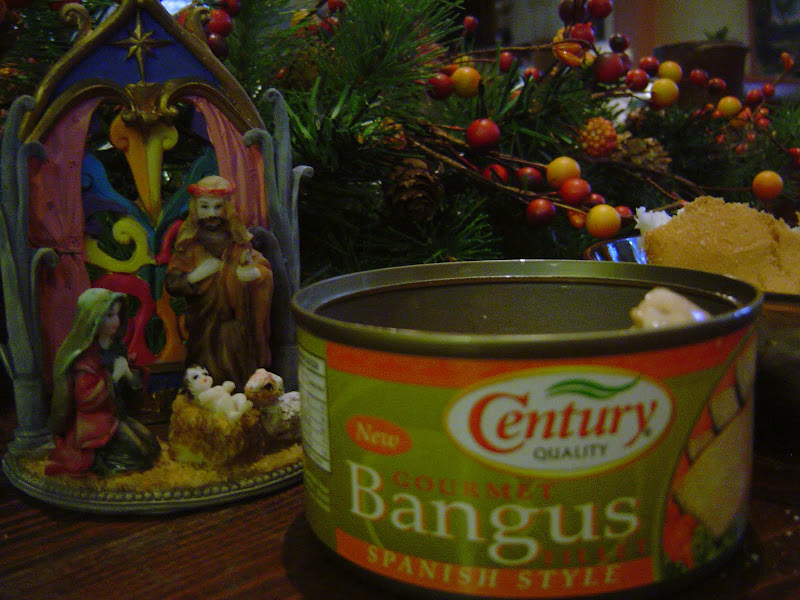 I will never eat nama chocolates the same way again.

Tonight, I went to Heavenly Chocolates with my mom, Kuya JB (of Regali Kitchen), and ate Steph to try the brand new dark nama chocolates by Sachi. But since we were starving, we took a quick detour in Tempura. Japanese food always brings my happy place. When I told my brother this, he said, “Already?!” And he had every right to wonder, because we were just getting started.

Last night I went for birthday dinner #4 at Bubba Gump in Greenbelt 3. I’ve always seen it around, and I’ve wanted to try it out sometime, and of course we’ve all heard it in the Forrest Gump movie, but last night was my first time there.

And it was a really really good first time!

END_OF_DOCUMENT_TOKEN_TO_BE_REPLACED

I never have cravings.

Yes, there are times when I feel like eating a specific cuisine (say, Japanese, the cuisine I most automatically look for when eating out) but I’ve never really had cravings, in the strictest sense.

You can ask anyone in my office. Every day when lunch time comes and they ask where I want to eat, I just shrug and say, “Anywhere.” If nobody speaks up, then maybe I’ll step up and suggest a place just to get us going.

But today… Today was different.

Until my officemates reminded me that there was no Burger King anywhere nearby.

My officemates suggested that I go to Brothers Burger instead so I could get my onion rings. BUT NOES! Brothers is a good burger place and all, but today I wanted Burger King onion rings. 😦

I was so disappointed. We went to the cafeteria to eat, and I didn’t have an appetite. My food would’ve been okay, I suppose, if only I wasn’t wishing that it was something else.

And I did. All peoples of the world rejoice!!!

I was happy with my Whopper Jr. (which had just the right amount of yummy veggies in it) and I had my Coke, and I had my onion rings!!

On a side note, the single-serve softdrink cup is now HUGE! I mean, okay, it’s not phenomenally humongous, but, compared to the usual Filipino size of drinks, it’s pretty big. And okay, maybe they’ve been like that for a while now, but it’s been more than two years since I last ate at Burger King, and at that time their single serve drink cups were the itty bitty ones.

Oh, and the “friendly Burger King crew” was definitely friendly. They rock.

Ahhhh. So, yes. Here I am at Burger King, blogging happily. I’ll finish my dinner and then go home, finally satisfied that I had my ONION RINGSSSSZZZ!!!

I'm Sarah, and I grew up analyzing food and looking for the next good eat. Join me as I walk, eat, get lost, eat, photograph, and eat some more as I make my way around the world!